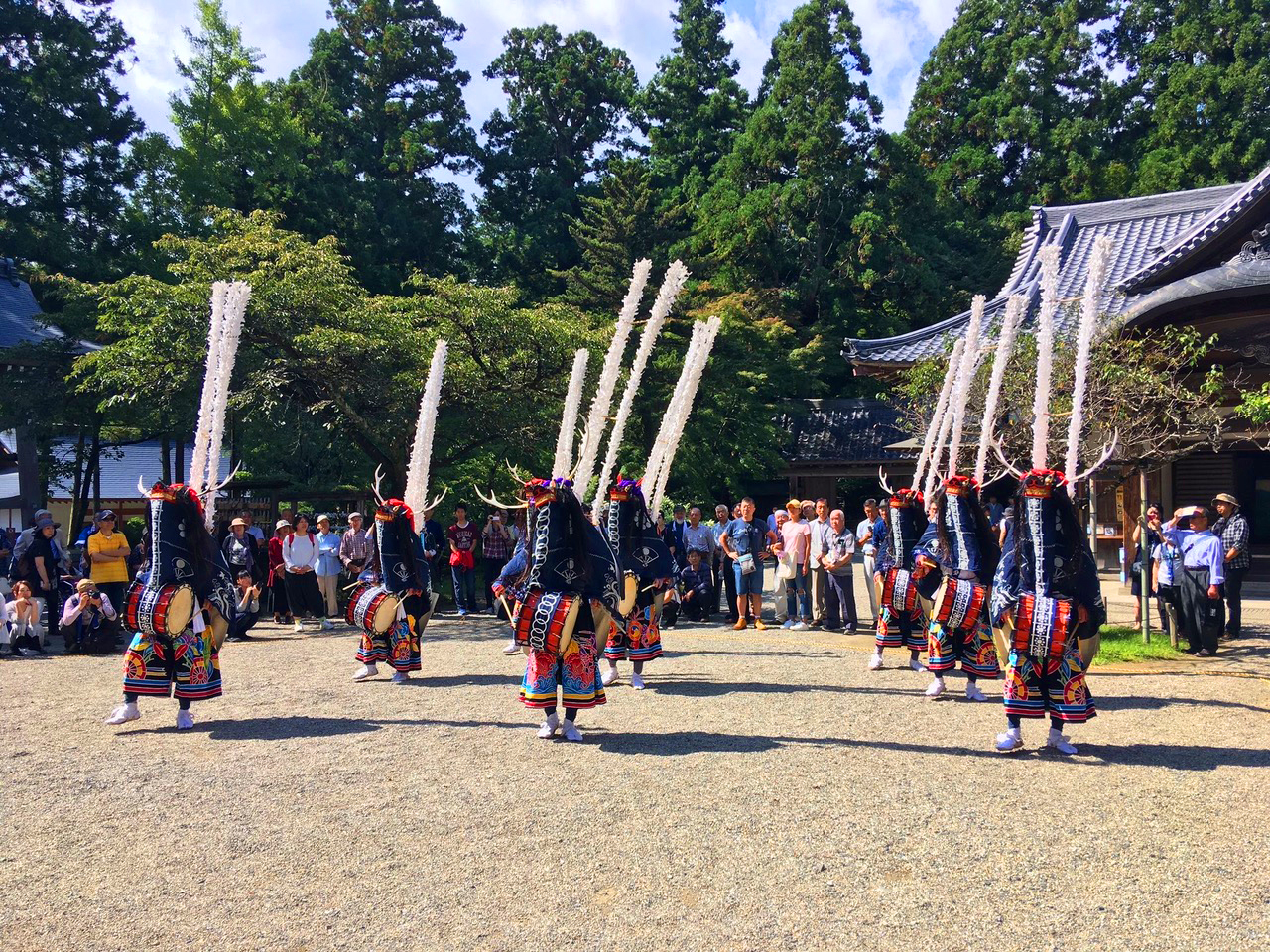 Dancers carrying tall 2.7-meter long “Sasara” bamboo stalks are dressed in costumes with “Kuyo” (family crest of the lord of Sendai) and “Wachigai” (family crest of the lord of Tome) made from glittering “Nagashi” cloth on which gods are drawn, and on their heads are placed brilliant deer antlers spreading out in eight branches. Clothed in such fabulous attire, the dancers of the Gyozan-ryu Mitobe Shishi Odori Dance exude a mystical aura.

According to a scroll written by Ito Bannai Mochitoh in Mitobe Village, Motoyoshi-gun in 1700, Mochitoh started this dance in Mitobe Village. The first to third head of the dance society came from Mitobe Village, the fourth from Hiraiso Village, and the fifth head was Iriya Shirobei from Iriya Village, and the sixth head moved to Aikawa Village (present Ichinoseki, Iwate Prefecture). After that, there was no evidence that the Shishi Odori was danced in Minamisanriku, and the Shishi Odori was handed down in Maikawa Village (present Ichinoseki, Iwate Prefecture).

A stone monument, which was broken in two, was discovered by chance in the midst of construction of a road. The monument is inscribed with the words “We are dancing as a memorial to the souls of all living creatures.” In 1982, this proves that the area around Mitobe was the birthplace of the Gyozan-ryu Shishi Odori. Mr. Kenichi Muraoka, the present president of the Society, made up his mind, “Now is the time to bring a rebirth of the Shishi Odori in Mitobe.” He asked the Shishi Odori dance preservation societies in the former Sendai Clan to accept him as a pupil. However, they all turned down his request because they did not want to teach the dance to outsiders. However, the late Senji Onodera who was the former president of the Gyozan-ryu Maikawa Shishi Odori Dance Preservation Society, accepted him as a pupil.

“We will gladly assist in the revival of the Shishi Odori in its birthplace.”In 1991, dancers from the Maikawa Shishi Odori Dance Preservation Society stayed overnight in Mitobe to teach the Shishi Odori. However, the Shishi Odori consists of 17 scenes combining 32 songs and eight dances. Until the dancers could master this Shishi Odori, they had to overcome so many difficulties that words cannot adequately describe them. Kenichi went Maikawa several times and eventually the Mitobe Shishi Odori was successfully revived.The Mitobe Shishi Odori, however, faced a crisis again. It was the Great East Japan Earthquake of 2011.All the houses in Mitobe were washed away by the massive tsunami and the town was completely changed in appearance. Amid this devastation, the deer heads and drums were miraculously found. Using the heads, drums, and other items found, the Shishi Odori was performed on a public holiday in May as a “memorial for loved ones who fell victim to the tsunami and earthquake and for the repose of souls of all living creatures.” It was the moment when everyone was convinced of their close bond and that the Shishi Odori had found its home. Tears were shed and many received courage from the dance.One interesting event occurred. Before the disaster, a town worker had brought a pair of splendid antlers that he had obtained from a wild deer that he had trapped, saying, “Should not this be the antlers for the deer head for the dance?” Then, the antlers went missing in the disaster, and later, one of the pair of white antlers was miraculously found in the debris. One day, a truck loaded with debris was passing in front of Kenichi. Half of the white deer antlers could be seen in the heap of debris. He ran after the truck and retrieved the antlers. The pair of antlers is now used as one of the antlers in the deer heads used in the Shishi Odori. These chalk-white antlers became the symbol of loss and revival. (Cover photo)Over the past five years, the young people of Mitobe mourned the victims of the tsunami and danced to give thanks to the lives nurtured by the sea and mountains and for their own lives. They have accepted the spirits of the Mitobe Shishi Odori Dance into their bodies and hearts. The Gyozan-ryu Mitobe Shishi Odori Dance touched many people’s lives over the past 300 years. It was able to overcome the unprecedented challenge of the massive tsunami disaster, and has been successfully revived in its birthplace of Mitobe in the Togura district.